New features out now! See our roadmap and request a feature
Home
>
DabbleU
>
How to become a Writer
>
>
Finishing your First Draft - Day Four 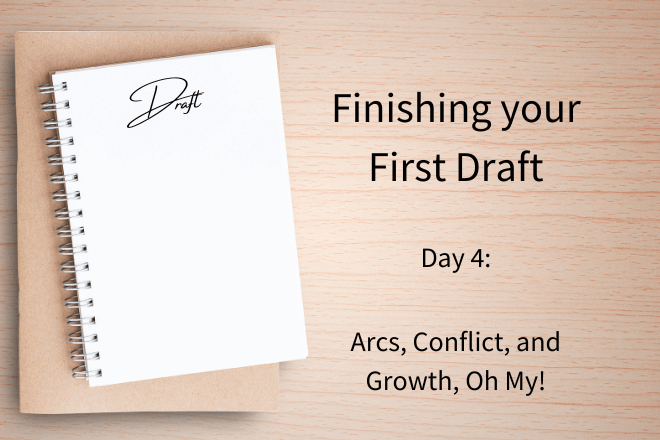 Now it’s time to get into the good stuff.

Way back on Day One (I know that was only three days ago, but I feel like we’ve known each other much longer), I told you that characters are the lifeblood of a story. Over today and tomorrow, we’re going to dissect this important element of your story.

In Let’s Write a Book, we break down the difference between main, secondary, and minor characters. If you need some clarification on those, I’d suggest you check out Character Basics in Chapter Five.

Developing amazing characters is a lot more than just figuring out their eye color and what they like on their ice cream (the best answer is, obviously, more ice cream). Complex characters make books great, and you can only have a complex character if you think about their:

Character growth is probably the single-most important aspect to a character. Growth doesn’t need to be positive (i.e., your character doesn’t need to hit the gym or become a better person), but it does need to drive change.

The best characters are the ones that overcome obstacles, change their ways, or fall from grace. Some characters can stay the same throughout a story, but we don’t remember those ones. We remember characters that struggle and deviate from the path they thought they were on.

The growth that characters go through is called a character arc. These arcs are the individual journeys that your made up people go through, correlating with either the main plot of your story or subplots.

All of your main characters (any protagonists or antagonists you have) need an arc. Your notable secondary characters will be more memorable and complex if you give them arcs, too.

If you want to become an expert on all things character arcs, check out this article from DabbleU: What is a Character Arc?

And do you know what drives character arcs and growth? Conflict.

Conflict is the engine that keeps your story–and the characters within it–moving. Without conflict, you wouldn’t have a story or a reason for character arcs. Think about it: why would our main characters leave their house, much less face off against a tyrannical ruler and their spooky wizard.

There are four main types of conflict plus a handful of smaller but equally awesome ones. Learn all about them by reading this article written by a really cool person (spoiler, it was me): Don’t Be Conflicted About the Four Types of Story Conflict

Don’t worry, tomorrow we’re going to cover all the fine details of your characters. Maybe you start building your story’s cast with the info we’ll discuss tomorrow, and that’s okay! But know that growth, arcs, and conflict are aspects of your character that are interwoven with your very story.

Get a strong grip on them and you’re well on your way to writing amazing characters.

Alright, time to revisit that folder I made you create on Day One. Today, I’m asking–nay, pleading–that you create a new folder within this one (and you can do that by clicking on the three dots next to your folder to open Folder Actions, then click on Add New Folder).

Name this folder whatever you’re naming your protagonist. Can’t think of a name yet? No worries. Just name the folder Protagonist. Then add a new Note to the folder, naming it Growth, Arc, and Conflict, and copy and paste the following into it:

How does this character grow?

What conflict(s) will drive this arc?

Then answer those questions! Your answers don’t need to be perfect or complete. Heck, we’re just brainstorming here. Write down whatever it is that comes to mind.

And don’t worry that this new folder isn’t in the Characters folder. With Dabble, you can simply drag and drop it wherever you want once we’re done!

Tomorrow we’ll add on all the details you could ever want for your character. Until then,