New features out now! See our roadmap and request a feature
Home
>
DabbleU
>
How to become a Writer
>
>
Finishing your First Draft - Day Seven 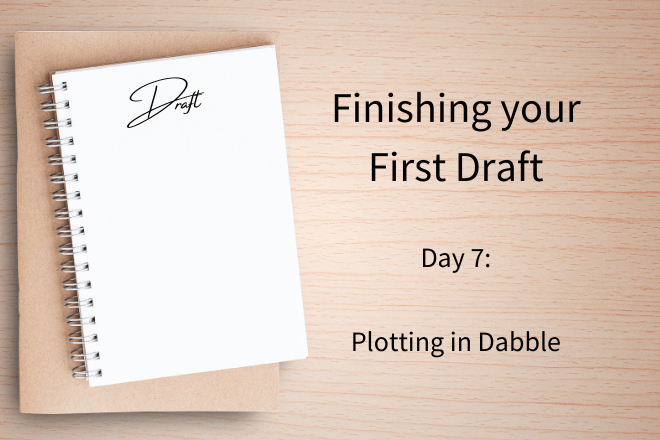 After yesterday, I can confidently say that you’re a three-act expert. Okay, maybe not an expert yet, but that’s what we’re here for today.

Once we’re done today, you will have plotted the nine major story beats and will have a great basis for either creating a detailed outline (if you’re a plotter) or a launch pad to start writing your first draft (for you pantsers).

So how are we going to do this? With Dabble’s famous Plot Grid, of course!

There are two types of Plot Grids in Dabble, allowing a substantial amount of versatility in your planning: generic plot grids and book plot grids. So we don’t freak any pantsers out, We’re going to start simple and use a generic plot grid.

To make one of those, simply click on Plot on the left nav menu to pull up the Plots interface. From there, you can easily create a Generic Plot Grid (which isn’t linked to scenes in your manuscript) or a Book Plot Grid. We’re going to be using the Book Plot Grid, because that ties Notes directly to your Scenes.

Go ahead and click on that Plot Grid to pull it up. You’ve already covered Plot Grid basics in the short opening tutorial checklist, but you can always pull that tutorial up again to give yourself a refresher. If you want some more Plot Grid goodness, click here.

For our purposes, we’re going to create a Plot Line and use that to map out our story beats. You should have an untitled Plot Line already but, if you were playing around with the Plot Grid before this, just click a space in a blank column to create a new Plot Line. Let’s name this Plot Line Three-Act Beats.

Note: If you don’t want to mess with your existing Plot Grid, you can make a second one by clicking on Plot in the Left Nav Menu and creating a new Book Plot Grid.

Once you’re done, it should look something like this:

Pretty easy so far, right? But there’s more to come.

So we have nine story beats in the three-act structure. Some of them take place over multiple scenes (like the rising action), while others only happen in one scene (like the climax). To start, go ahead and make eight more Scenes so you have nine in total. It’s as easy as clicking on the plus button beneath the existing scene.

Another note: This will add all these scenes to Chapter 1. You can always drag and drop these Scenes into their proper Chapters later or make new Chapters now and sort them out. I’d advise later; you’re likely going to expand on some beats into multiple Scenes and Chapters.

Once you have nine Scenes, do the same thing under the Three-Act Beats Plot Line so that each Scene has an associated Plot Point. Title each of them after a story beat, in order. As a refresher, those beats are: Exposition, Inciting Incident, First Plot Point, Rising Action, Midpoint, Plot Point Two, Pre-Climax, Climax, and Denouement.

You can also title the associated Scenes, if you have something in mind. Don’t worry if you are still thinking about them, though. After it’s all done, you’ll have something that looks like this (some of mine are cut off, but you get the idea!):

All that’s left is to add your notes to the Plot Points by clicking on them and typing or copying and pasting your notes from yesterday. Go ahead and expand on those notes as much as you’d like.

If you’re feeling really adventurous, add some more Plot Lines so you can map out character arcs, love interests, subplots, and more!

The Plot Grid is a powerful tool. You’ll notice that all the Notes you make here are available as you’re writing the associated scene, making writing a breeze. So have fun with the Plot Grid and get ready to write your best book!