New features out now! See our roadmap and request a feature
Home
>
DabbleU
>
Plot
>
>
The Fichtean Curve: A Dorsal Fin of Catastrophe

The Fichtean Curve: A Dorsal Fin of Catastrophe 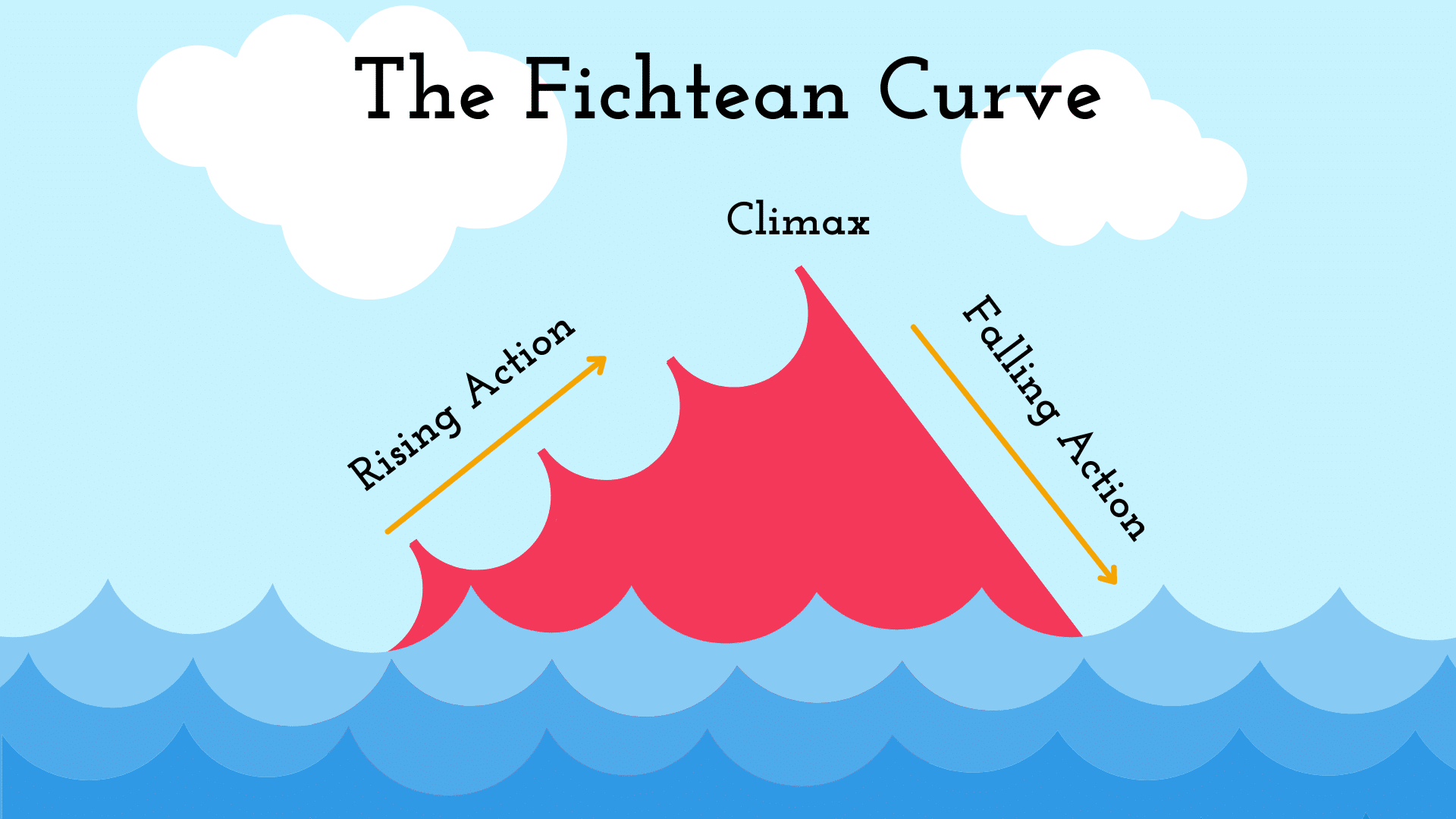 Laid out in John Gardner’s 1983 work The Art of Fiction, the Fichtean Curve is a sharky-shaped structure that can help you easily plan out your novel. Get your character into trouble as fast as lighting, then increase that trouble incrementally throughout the story. Let's dig into this dorsal fin!

What is the Fichtean Curve?

The Fichtean Curve focuses on conflict and crises and has three main components: rising action, climax, and falling action.

Who created the Fichtean Curve?

John Gardner is a prolific writer who produced many works on the process of writing. He formalized the Fichtean Curve in The Art of Fiction. Gardner compiled many ideas that were prevalent theories on the structure of stories and created this simple framework to help writers understand how a story builds on itself until reaching a climactic resolution and then slowly finishes any loose ends (but maybe not all of them).

The Fichtean Curve is unique because it is simple and flexible. The unique dorsal fin shape illustrates the progress and tension of the story. While other narrative plotting devices will often have a certain number of steps such as Dan Harmon’s Story Circle or the Snowflake Method, the Fichtean Curve really allows you freedom in your plotting. The only set rules are that various crises must occur during rising action, which build to the climax, and resolve in the falling action. You can include as many crises as you’d like and can use this simple structure to build out your story any way that you would like.

When planning your rising action, you should get to the inciting incident, or first crisis, as quickly as you can. You can then build exposition around that event as the characters struggle with their first big challenge.

After that, your characters should face bigger and bigger obstacles as the story continues. Each of these will build to the final crisis, the climax, which will be the most tense moment of your story. Each crisis should raise the stakes.

This is the big moment of the story. It can be a big reveal, a final fight, or a terrible loss. It all depends on the story that you are telling. Remember that each of the crises should lead your characters to the climax. The more that each crisis foreshadows the climax, the more impactful the climax will be. The characters can only overcome the climax because of the growth they've gone through.

This is where you let your readers breathe. Each question and crisis that you created will have some sort of resolution here. Some may not be fully resolved, especially if you are writing a series. Each will get their own moment to resolve in some way, if only for the short term (but feel free to leave your reader with some questions).

Examples of stories that use the Fichtean Curve

We will use the Wizard of Oz as an example of the Fichtean Curve. Here's how we would use Dabble's Story Notes to plot out each point.

‍Crisis 2 - Dorothy needs the Wizard of Oz to help her get back to Kansas.

‍Crisis 3 - The Scarecrow wants a brain. The Tinman wants a heart. The Cowardly Lion wants courage.

‍Crisis 5 - The Wizard of Oz won’t help until they get the Wicked Witch’s broom.

‍Crisis 6 - Flying Monkeys, Dorothy is captured. (This part is terrifying.)

‍Climax - “I’m melting!” Through the help of her friends and basic hygiene, Dorothy defeats the Wicked Witch.

‍Resolution 1 - They finally meet the Wizard of Oz.

‍Resolution 2 - Each of Dorothy’s friends finds what they were looking for within themselves.

‍Resolution 3 - The Ruby Slippers take Dorothy home. (Thanks for keeping that secret till the end, Glinda!)

When should you write using the Fichtean Curve?

Because of the fast pace of the Fichtean Curve, this structure lends itself well to mystery stories and thrillers. But by all means, try it out for whatever story you are writing if you feel that it would be effective for you. The best way to learn how to write a story is to experiment. And if it doesn’t work, check out these other plotting methods that may work instead.

In a mystery or thriller, the first chapter will set up the scene of the crime (the first crisis). The detective will then follow a series of clues and hunches, during which various problems will arise (crises). The detective then pieces together whodunnit (climax), then the baddies get their comeuppance (resolution).

The Fichtean Curve is a simple and flexible framework that can help you plan out your structure. By building tension through various problems, reaching a climax, and resolving each problem in turn, you can effectively draft your plot. And you can keep all of this in Dabble’s Story Notes while you write.

Try out the Story Notes and other features Dabble has to offer with a 14-day free trial here.

Robert dreams of being the Bob Ross of writing. He likely couldn’t pull off the afro, but he hopes that—like Bob Ross with painting—he can help everyday people realize the simple joy of writing. He believes that anyone can write a masterpiece with a bit of effort, happy accidents, and dedication. He started habitwriting.com to further his passion and share the lessons he’s learning about writing. He joined Dabble to help as many writers as he can reach their dreams. Robert loves to read, write, binge tv shows, and play long strategic board games with his amazing wife, Emily.