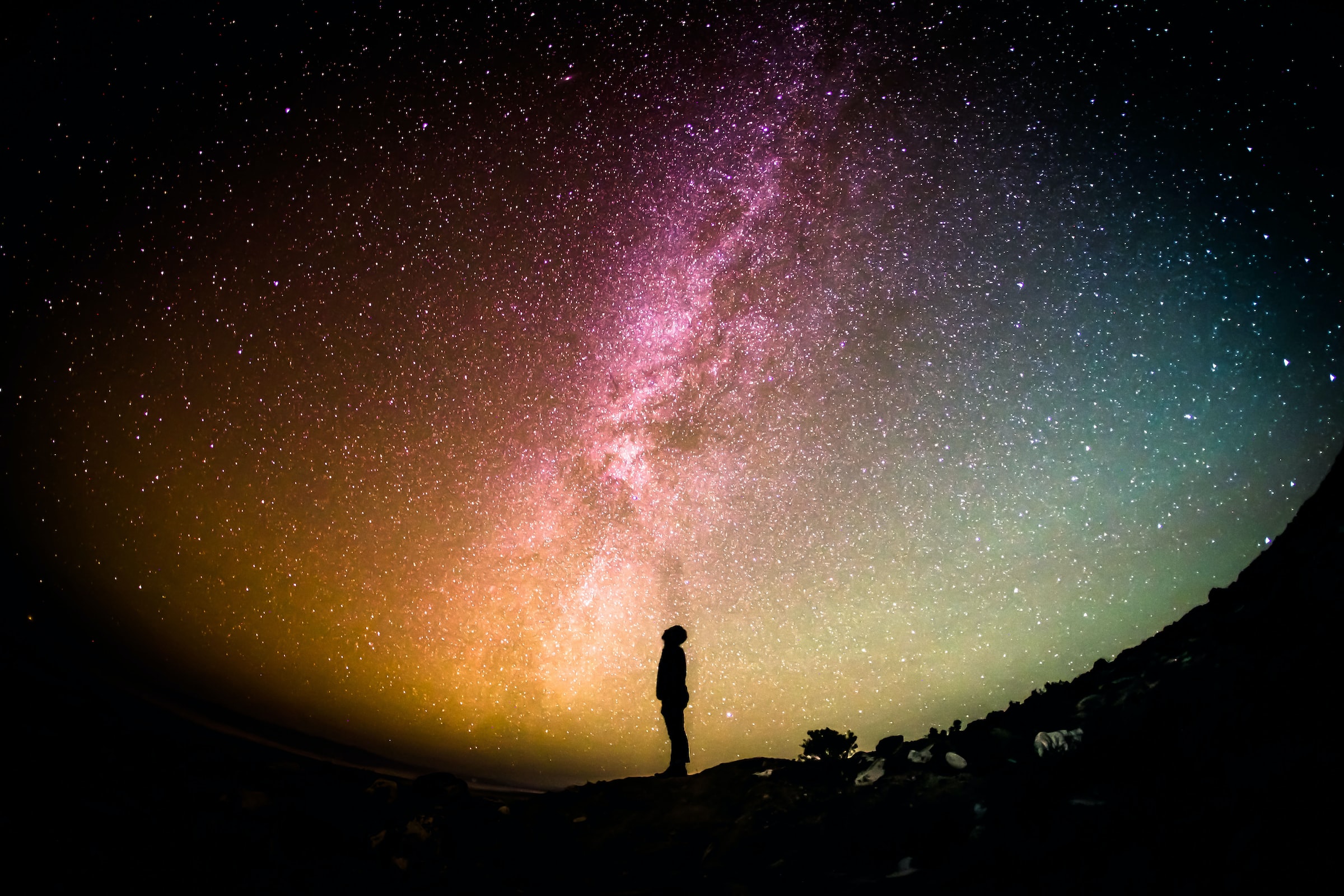 If you’re looking for a worldbuilding guide, you probably harbor an ambitious, dazzlingly beautiful goal deep within your writerly soul.

You want to create a world that stays with your readers—a world that draws them in completely and remains with them forever.

I keep an ash wand close to my desk—my souvenir from The Wizarding World of Harry Potter. It’s there to remind me how I felt wandering alleyways in my Ravenclaw cardigan, wand in hand, like the fictional world I’d disappeared into a million times was real and actually belonged to me.

The point of this reminder is not to make me feel like a wizard again but to keep me focused on what a writer can do. Creating a captivating reality is hard work. I want to remember that the reward for doing the work is inspiring awe, awakening horror, or sparking discussion.

If the idea of designing a world that captivates and transports your reader gives you chills, stay with me. What follows is a worldbuilding guide that will walk you through:

‍Worldbuilding is the development of your story’s physical and cultural setting. This includes everything from flora and fauna to values and taboos.

Anytime you want to write a book that contains fantasy or science fiction elements, you’ll need to do some worldbuilding. That’s true whether you’re writing a high fantasy novel like Lord of the Rings or a multi-genre work like Outlander, where fantasy elements exist within the real world.

Regardless of how much worldbuilding your story requires, there is one golden rule you must keep in mind:

‍Your world must serve the story.

That doesn’t mean every hill, flower, and language has to fulfill a greater purpose than merely creating a sense of place. It just means if you bother to design a complex religion or spend three pages describing the constellations visible from your planet, those details should contribute to your theme, character arcs, or conflicts.

Having said that, I’m now about to walk you through a worldbuilding guide that will (hopefully) have your imagination going wild. You might accidentally over-create in your quest to find the details that are relevant to your story. That’s fine as long as you’re willing to part with those precious dragon babies if you discover they’re not pulling their literary weight.

How Much Worldbuilding Do I Have To Do?

It depends on your particular story and how much of this world has to come from your imagination.

Your worldbuilding should fit into one of these three categories.

If your fantasy or sci-fi novel is set in the world we live in, you’ll be doing real world fantasy worldbuilding. Basically, you’re adding fantasy or science fiction elements to our actual reality.

A real world fantasy novel could be one that reimagines history or real-life events with a fantastical twist, like Outlander or the Temeraire series. It could bring the fantasy to our modern world, like in American Gods or almost every comic universe.

Or maybe you’re building a dystopian future world, like in The Hunger Games or The Parable of the Sower.

Whatever your real world fantasy looks like, your challenge with this type of worldbuilding is not to imagine a new reality from scratch, but to blend the familiar with the fantasy. You might need to ask questions like:

This is exactly what you think it is. You’re building a second world—a world we don’t know—completely from scratch. You see second world fantasy worldbuilding in books like The Lord of the Rings and Star Wars.

Every single thing is up to you. The landscape, weather, fauna, flora, politics, family structure, language, belief systems… even what people say to each other when they sneeze. Your imagination makes the call.

Fun, right? The trick here is to make sure your world makes sense, serves your story, and—this is a big one—is eventually complete. It can be really hard to know when you’ve built enough.

But we’ll get to that in a minute. First, let’s look at the third type of worldbuilding you might do.

Harry Potter is a great example of this. Readers spend most of the Harry Potter series in a second world—the magical world of Hogwarts. Almost everything in this world is brand new, from the postal system to the rules of magic.

But this world is hidden within the world we know. Every book opens (and eventually returns to) our familiar Muggle reality. Fantastical elements still exist. Harry is still a wizard on Privet Drive. Dementors can visit the neighborhood. But it’s our world.

The same sort of balance might be right for your novel if you, too, especially want to play with the idea that there are realms beyond our awareness.

Hopefully these three categories have given you some idea of how you need to focus your efforts when inventing a new reality. Now, let’s dig into the heart of our worldbuilding guide.

First, let’s talk about when you should start worldbuilding.

The answer is now. You should do it now.

If you’re a hardcore pantser, you can still allow yourself to make some discoveries as you write. But I highly recommend taking the time to get a solid grip on your world before leaping into that first draft.

The more you leave up to discovery, the more gaping holes you’ll find when you review your first draft.

As for where to start, I say start with what excites you or makes sense to you. There are a lot of worldbuilding guides that say, “Start with terrain. Add plants. Draw a map.”

Totally fine. If you’re just jazzed on the idea of building a world and want to see what story emerges from it, start with that.

But if you’re envisioning a particular character or have an idea for a compelling conflict, I think you’ll make faster headway asking questions to expand that specific vision. Stuff like:

What societal values would make this character feel out of place in this world? What’s the history that makes this alliance between species so risky? How can the landscape make this journey harder or make certain resources impossible to come by?

This worldbuilding guide is not a step-by-step recipe. It’s a rundown of worldbuilding aspects to consider. Some of these things may not even apply to your story. Take what you can use whenever you can use it.

In his BYU lecture series, fantasy author Brandon Sanderson describes the physical setting as “all the stuff that would exist even if there were no sentient beings on the planet doing things.”

This includes (but isn’t even remotely limited to) the following elements:

*This one can include both physical borders (like oceans) and political borders. The latter would go under cultural worldbuilding, but you could still record it on a map, so we’ll talk about it now.

Now let’s talk about the aspects of the world that are created by sentient beings. Once again, this list does not cover everything, but it gives you a pretty good start.

Tip: If you plan to create your own conlang (constructed language), we’ve got a great guide for that.

Now, if all has gone according to my evil plan, your brain is not only spinning with answers but also with new questions I didn’t ask. Which leads me to another important query…

How Do I Organize All This?

A worldbuilding bible is the place where you store information about your fictional world. Maps, sketches, histories… all of it. This could be a physical binder if you like to keep it old school. You can also store all this information on a word processor.

‍Or you could keep it in your Dabble Story Notes where it’s always one click away as you draft your novel.

How Do I Know When I’m Ready to Write?

Ah! Such an important question. I love it.

Unfortunately, I cannot answer it for you. How much worldbuilding you need to do depends on the nature of your story, and because each story is different, there is no universal answer.

What I can do is remind you that the central goal of all this is to build a world that serves your story. So let your story tell you when you’re done.

Do you have a clear grasp on the cultural and physical elements that influence who your characters are and the obstacles they face? Are you able to make this world vivid and real to your reader?

If you over-build, you’ll find yourself suffering from Worldbuilder’s Disease. Symptoms include:

In other words, if you find yourself obsessing over the world and not the story, it’s time to stop worldbuilding and start writing your novel.

If I may make one final suggestion…

Write Your Novel With Dabble

It’s an incredible tool for writing complex stories in made-up worlds. There are tons of organizing features to help you keep your head together: the Plot Grid, Story Cards, Stickies, and more!

Even better: you can try it for free for fourteen days. There’s not even any of that sneaky “Enter your credit card first” business. Just click here and start building new worlds.